The Fresh & Onlys - Play It Strange 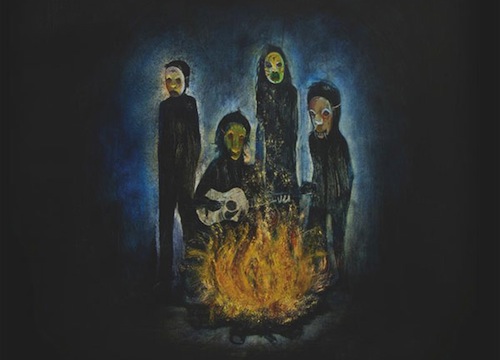 One month ago, Dead Rooster was in Barcelona for the Primavera Festival. This very friday, in the middle afternoon, Joe Gantdelaine and I were sitting in the Parc Central del Poblenou, a satellite stage of the festival. There, we have grass rather than concrete but unexplicably, the vast majority of the festival audience snubs it. A San Miguel cup in hand, comfortably seated in plastic garden chairs, in the shade of the surrounding trees, we watched the concert of the Fresh & Onlys, the authors of the recent Play It Strange. The concert convinced us to get it.

The record starts with a charming lightness song, Summer Of Love. Clean guitars and heavy reverb for the lead singing voice makes it an easy and seducing introduction, in an atmosphere caribbeanized by organs, xylophones and bongas. The second track is a different gear: high-pitched vocals, the bass leads the way while the guitar keeps playing this simple but terrific riff that concludes the best song of the album, Waterfall, that you might have already seen here.

If Lee Mavers was twenty years younger, was taking anti-depressants and Frosties for breakfast, was born in San Fransico and spent more time at the beach, The La’s would be called The Fresh & Onlys. Of course, the comparison is completely stupid, but let’s face it: same taste for the coolest possible folk (Until The End Of Time, Red Light, Green Light), same mix of perfect pop songs (Waterfall for sure, but Be My Hooker and Plague Of Frogs as well) and epic titles (Tropical Island Suite).

Let me conclude by this nice anecdote about the fact that people should buy vinyle records again. Plus it proves the band is really cool. A few minutes after the concert ended, i went close to the stage to ask the band if they could sell me their record. The guitarist nodded and gave me the 12” record saying: “we sell these 20 euros at the festival but right now, just name your price and it will be fine”. The deal was set for 12 euros, MP3-download-coupon and hand-shake included.

Givers - Up Up Up